A week ago, We already shared this news that first android 11 (Android R) beta 1 version may launch on June 3, 2020. But due to ongoing protests in the United State, Google stopped it launching and decided to delay the launch until further notice.

If everything will fine, Google will push android 11 beta 1 update for Google Pixel phones and later on, more number of the device was added to the list.

As we all know OnePlus has already pushed the Android 11 Beta 1 update for its OnePlus 8 series Smartphone. In that series, Xiaomi’s flagship series the Mi 10 and the Mi 10 Pro are other android phones which are getting new beta 1 android 11 (Android R) to experience new android features with extra layer of security.

Out of the box both Mi 10 and Mi 10 Pro devices comes with android 10 MIUI 12 which was launched in Fab, 2020.I t is a no brainer that these two devices would be the first among all other Xiaomi phones, as both the phones are the OEM’s current flagship and are powered by the Qualcomm SM8250 Snapdragon 865 Processor. Additionally, Octa-core CPU with the combination of 256GB/ 8GB RAM, 256GB /12GB RAM, 512GB /12GB RAM are enough to boost its performance and speed.

To make it more powerful android machine, both devices received stable builds of the Xiaomi’s hyped custom UI, the MIUI 12.

In our future post we will add android 11 beta 1 update file for Mi 10 and Mi 10 pro users. So you can install it on your own device to experience new addition of android features.

Here is official announcement from Xiaomi on their official Mi community forum website.

Great News! We’re excited to announce that Android 11 Beta 1 will be available for Mi 10 and Mi 10 Pro Soon. We will continue to keep you updated. 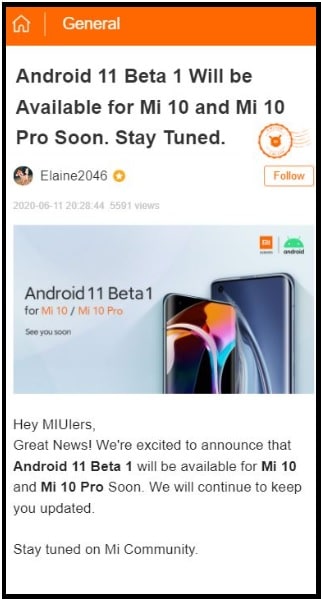