How To Fix Samsung Pay Not Working On Galaxy S9

If you have bought unlocked version of Samsung S9/s9+ in US then probably you can experience this issue on your own device.

According the forum communities, Snapdragon version of the device is affected, some have also reached out about the same Samsung Pay not working problem on imported Exynous Galaxy S9 & S9+ units.

In our view it may because of Samsung pay in the US rather than the phones. So it’s really bad and annoying situation for Galaxy S9/S9+ users of US, they can’t use Samsung pay out of the box. But here we are going to share some important point which can help you to fix the Samsung pay is not working on Samsung Galaxy S9 & S9+ Snapdrogan and Exynous variant.

Before going to fix Samsung pay issue on Galaxy S9 and S9+ unites, here we are listing some common issue related with Samsung pay feature.

I got a update that I have to update the Samsung pay to use it. But there is no any new update for Samsung pay in Google play store and Galaxy app store. I also tried to clear cache and data on Samsung pay. But till now Samsung pay not working on Samsung Galaxy s9. 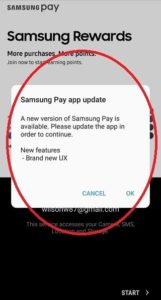 when I try to set up Samsung Pay, it says it’s not compatible with this device. I uninstalled it, and reinstalled from the Play Store and get the same error. If I install from the Galaxy App store, I don’t get the incompatible message, but I keep getting a pop up saying there’s a new update but everytime I press OK, it just sends me back to the home screen. Is Samsung Pay just not updated to be compatible with the S9 yet?

How To Fix Samsung Pay Not Working On Samsung Galaxy S9

After getting the same issue report on Samsung portal, Samsung has acknowledged the issue and they released a new update after fixing the bug. New update is available on Galaxy app store with new patch, just go to Galaxy app stor and update the app by tap on patch button.

After updating the app, still unable to use Samsung pay on Samsung Galaxy S9 / s9+ mobile then apply the additional methods from below section.

Sometimes rebooting or restart is must to apply the changes on the device. Simply reboot he device to apply all the modification. For this, press power button for few second, tap on power off option and hit ok. Take few minutes and then again power on the device by pressing power key.

You may also try to reset the Samsung pay app if it’s not working on Samsung S9 & S+ mobile. For this, Go to Samsung Pay app, click on sign-in option from the upper right corner. Again, click on “Forget Password” option. To reset the app password, it will ask you to enter the existing mail ID. Simply enter the correct account ID, type the security code and check your mail box for new password.

That’s all about how to fix Samsung pay not working on Samsung Galaxy S9 and S9+ mobile? Simply apply the changes and it fix Samsung pay issue on galaxy s9 / S9+ easily.